Builders of modern India longed to see India emerge out of ignorance, fatalism and poverty, and to take its place among the most advanced nations of the world who had benefitted from science and technology. This calls for a ceaseless campaign towards education. Any nation that wishes to achieve greatness can only do so on the foundation of a strong education system that reaches its masses. It is nothing short of a sin to keep a population unlettered.

A focus on education is a natural adjunct to Naveen Jindal’s commitment to youth welfare. His unrelenting support to his alma mater – the University of Texas at Dallas – was reciprocated when the university renamed its management school as the Naveen Jindal School of Management in 2011.

From the global to the local, Naveen’s involvement in the field of education is all encompassing. He has made it his goal to set up schools across his home state Haryana and in the vicinity of all his factories in India. As part of this effort, he runs nine O.P. Jindal schools in Chhattisgarh, Jharkhand and Odisha. The policies of these schools mirror Naveen’s belief that “education should be imparted in such a manner that it does not impose any stress or strain on the child, who should find it attractive to go to school”.

The O.P. Jindal Gramin Jan Kalyan Sansthan set up by Naveen in memory of his father Om Prakash Jindal has done considerable work in the area of education in Haryana. The Indian media has often carried reports about schools in rural areas that do not have sufficient teachers, leading to a situation where students sit idle in classrooms. This is particularly dangerous in a poverty-ridden country such as ours where many parents consider it a loss-making proposition to send their offspring to schools since that means one less pair of hands to work and bring an income into the household. The Sansthan recognises these perils and has voluntarily hired teachers on its rolls for the benefit of schools with a paucity of staff. The goal of this continuing endeavour is to minimise the dropout rates among students in these institutions once parents see the benefits their children derive from access to skilled teaching staff.

Naveen is also the founder and chancellor of the O.P. Jindal Global University (OPJGU) in Sonepat, Haryana, which he set up in 2009 in memory of his father Om Prakash Jindal. OPJGU is part of his concerted effort to make India an international knowledge leader. It is home to the Jindal Global Law School, Jindal Global Business School, Jindal School of International Affairs and Jindal School of Government and Public Policy. The university aims to bring global curricula to Indian students. In keeping with its slogan of “bringing India to the world, bringing the world to India”, it has already established tie-ups with Harvard University, Yale University, University of Michigan, Cornell University, New York University, King’s College London, University of Cambridge and other reputed educational institutions worldwide.

In recognition of his “outstanding contribution to legal education and corporate philanthropy”, Naveen was conferred with the Capital Foundation Society’s Justice P.N. Bhagwati Award which was presented to him by former President A.P.J. Abdul Kalam in December 2011. 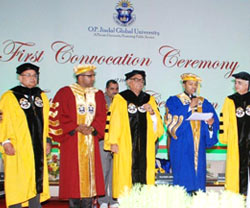 Assessing Naveen’s impact on legal education in the country, Professor Stephen P. Marks of Harvard University and Member, Governing Body, OPJGU said, “Friends of India – and I certainly count myself among them – have lamented with enlightened Indians the gap between India’s leadership in legislation and judicial review on the one hand, and the quality of legal education in India on the other. The best of India’s young jurists have reached the summits of legal education outside India. However this gap is closing and one of the most outstanding agents of this change has been Mr. Naveen Jindal and his funding of the Jindal Global Law School (JGLS). Mr. Jindal has seen the future and has understood how a significant investment in legal education through JGLS will pay great dividends for India and the world. Through this extraordinary and inspired act of corporate philanthropy, Mr. Jindal threw down the gauntlet for other industrialists to make similar philanthropic contributions to legal education.”

In a recent report relating to higher education in India entitled “New Realities, New Possibilities: The Changing Face of Indian Higher Education” published by Ernst & Young and FICCI, JGLS and the Indian School of Business, Hyderabad, have been recognised as the only two key institutions in India which have been classified as “Premium Higher Education Institutes” for being “comparable to the best in the world, offering students the best of global standards in terms of infrastructure, curriculum, faculty, systems and processes”.