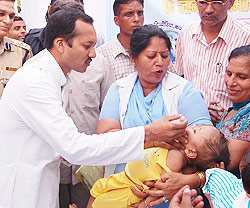 Naveen Jindal firmly believes that a population’s health is directly linked to the general level of productivity and well-being. Keeping this in mind, he has launched a number of initiatives over the years to increase health awareness, introduce sophisticated healthcare facilities and improve delivery mechanisms throughout Haryana, as also in areas around his factories and elsewhere across India. Through these efforts, he is simply putting into practice his concerns about national healthcare that he has addressed repeatedly on various public platforms. In a speech delivered during the Budget session of Parliament in 2009, he had laid particular emphasis on the issue of rural healthcare:

The condition of healthcare in rural areas is dismal with hospitals few and far between, and even these hospitals are without basic equipment and medicines and doctors. Medicines are diverted for outside sale, doctors on government payroll are missing because they are busy with their private practice and expensive equipment is lying disused in hospitals…

In 2005, Naveen set up the O.P. Jindal Gramin Jan Kalyan Sansthan in memory of his father Om Prakash Jindal. The Sansthan is a non-profit organisation working for the holistic development of Kurukshetra, Kaithal, Yamunanagar and Hisar, all in Haryana. Its focus areas so far have been health, youth and women’s empowerment. 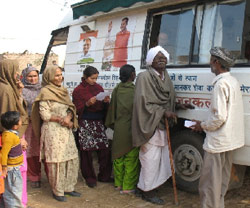 Physiotherapy Centres: Physiotherapy is a focus area of the Sansthan’s healthcare activities. It has established two physiotherapy centres, one in Kurukshetra and one in Kaithal. Health camps specific to certain ailments or multi-specialty endeavours are routinely undertaken. Among them, blood donation camps and blood testing camps spearheaded by the Sansthan have been held at over 3,850 sites. Health camps organised by the Sansthan have led to the cure of 2.75 lakh-plus patients of various diseases so far.

Sanitation & Public Health: But good health begins with prevention rather than cure. In accordance with this universal truth, the Sansthan’s credo is that every house in its area of coverage should have a toilet. The result: it has built a total of 50,674 toilets so far, some independently and some in association with the government. Sanitation awareness drives are also conducted to instill behavioural changes in people that would lead to an improvement in health and sanitation.

Eye Camps: The Sansthan organises at least 20 eye camps reaching more than 8,000 people every month in Kurukshetra, Kaithal, Yamunanagar and Hisar. A panel of doctors has been formed to carry out eye check-ups in villages and perform operations in high-tech operation theatres, all free of cost. So far, the number of surgeries conducted has been 34,548 and counting; 1.25 lakh-plus spectacles have also been distributed. The differently abled are also covered by the Sansthan’s work through the disbursement of financial aid, tricycles and other equipment.

Monitoring of the National Rural Health Mission: In tune with Naveen’s intent to ensure efficient delivery of government-established healthcare schemes and facilities, the Sansthan closely monitors primary health centres (PHCs), community health centres (CHCs) and sub-centres. Findings and recommendations are shared with the district administration. Naveen has personally undertaken a constituency-wide survey of the National Rural Health Mission to check the status of PHCs, CHCs and sub-centres in Kurukshetra. 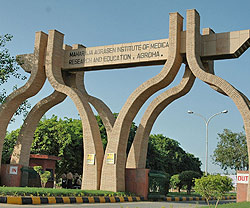 Beyond Haryana, Naveen has ensured a substantial improvement in healthcare facilities in all areas in the vicinity of his factories across India. One of the most significant steps he has taken in this direction is the setting up of the 100-bed multi-specialty O.P. Jindal Hospital & Research Centre in collaboration with Fortis in Raigarh, Chhattisgarh. The disciplinary facilities the Centre offers are general medicine, surgery, gynaecology, orthopaedics and paediatrics. The hospital has four well-equipped operation theatres, a cardiac ICU, a burns ICU and a neo-natal ICU.

In addition to the O.P. Jindal Hospital, Naveen has set up an OPD facility in the local government hospital in Raigarh and charitable clinics in the 42 villages JSPL has adopted around its Raigarh plant.

A constant effort is made to improve the quality of life of persons with disabilities in the region through focused camps where tricycles, wheelchairs, crutches and hearing aids are distributed. Since 1996, JSPL has been organising family planning camps for the local population.

Since cataracts and other ophthalmic disorders are common in Raigarh district, leading surgeons from across India are invited to conduct cataract surgeries at free eye camps organised by JSPL. General medical camps with doctors from prominent hospitals are also held on a regular basis.

Villages in Raigarh district are prone to water-borne diseases. Safe potable water is scarce and in many areas humans and cattle share the same source of water. JSPL has taken the initiative to install water and hand pumps in its adopted villages.

Naveen’s healthcare activities extend beyond Raigarh to Patratu in Jharkhand and Angul in Odisha, which have all benefitted from regular pulse polio vaccination camps and HIV/AIDS detection programmes. To improve access to healthcare, village medical camps are routinely organised through the use of mobile medical vans in Raigarh, Patratu and Angul.

Driving home the point that benevolence should begin at home, JSPL employees in Chhattisgarh, Jharkhand and Odisha undergo periodic medical examinations. Physical fitness programmes and yoga classes are held for them and their families.