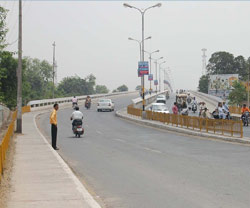 Naveen Jindal has actively worked to improvise the infrastructure of his constituency and has spent 10.92 crores from MPLAD for the development of Kurukshetra Parliamentary Constituency. A further sum of Rs. 47.55 crore has been devoted from OP Jindal Jan Kalyan Sansthan for the overall development of the constituency and its peripheral regions. His untiring efforts have transformed the face of Kurukshetra from being a sleepy town to a modern, developed city that is on the threshold of becoming a major tourist destination.

Fund allocation and government schemes have been implemented to provide better infrastructure all along the constituency. Some notable initiatives include –

The ‘O. P. Jindal Park and Musical Fountain’ in Kurukshetra has been developed in the fond memory of the great leader Shri O. P. Jindal in an honest endeavour to enhance the quality of life of people living in the region. Spread across 14 acres, the ‘O P Jindal Park’ has a Musical Fountain – the biggest of its kind in Northern India.

This park aims to provide a different experience to people in various age groups; there is something in it for everyone. There is a toddlers’ area, sit outs for elderly people, meditation garden, jogging area and a striking rose garden. The ‘O P Jindal Park and Musical Fountain’ is a dedication to the Nation by the Jindal Family, on the first death anniversary of this noble leader. 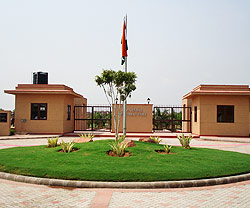 The ‘O P Jindal Park’ at Hisar is spread across an area of 23-acres. The park has a memorial area, where a 12-ft high bronze statue of Shri OP Jindal (fondly remembered as Babuji) is built. This memorial area briefly depicts his biography and achievements. The park consists of a Sundial and a ‘Kaal-Chakra’ that has been installed to depict the time frame.

The park also has a meditation center, an amphitheatre with a beautiful fountain, sports arena with volleyball and basketball courts, cricket ground and a specially designed children’s play area. The entire park has rainwater-harvesting points to efficiently utilise rainwater in the maintenance of the park instead of drawing on existing water resources.

O P Jindal Park at Yamunanagar was inaugurated on the occasion of the 78th Birth Anniversary of Shri. O. P Jindal. The memorial park consists of a steel chakra of 10 ft diameter, signifying the Human Body (Brahm). The sports stadium in the park spreads in 4.75 acres and has a large sitting capacity to host big events and tournaments. As sports and physical activities had been imperative for Shri O. P. Jindal, sincere efforts have been taken while constructing the stadium for the benefit of sports enthusiasts. The lake in the park spread over 3.31 acres is a special attraction.