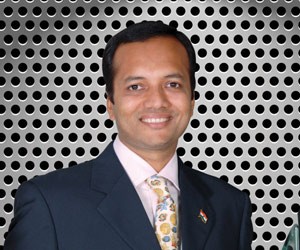 Naveen Jindal has always believed that growing together with customers, employees, shareholders and communities is the essence of being a good corporate citizen. When he took over the reigns of the Raigarh operations of Jindal Strips Limited (JSL) in 1993, the company was a moderately performing enterprise. It was his vision and farsightedness to pursue innovative approaches and optimise operational efficiencies. All this with a view to providing ‘total solutions’ to all the stakeholders.

Sponge iron was the backbone of the Raigarh operations. One of the first decisions he took was to bring global economies of scale in the company’s sponge iron production. Today, we are proud that JSPL has the largest coal-based sponge iron manufacturing capacity in the world and produces sponge iron at the lowest possible cost.

Naveen also realised that reduction in costs was the guiding principle for long-term growth and profitability. Hence the commissioning of the new blast furnace not only enhanced the steel-making capacity but also reduced the cost of production. Continuing in the path of forward integration, he took the decision to set up the Rail and Universal Beam mill, which manufactures the world’s longest rails in the country, and also parallel flange beams and columns in large sizes for the first time in India. World-class products from the state-of-the- art manufacturing facility has put JSPL among the best in the industry.

Realising the need to reduce inventory costs and market finished products at competitive prices, he took the strategic decision to acquire coal and iron ore mines, thereby making them self-sufficient in key raw materials, essential for the manufacture of steel.

The economies of scale are increasingly making JSPL the preferred choice of the customers. The company continues to seek new horizons that complement the market strengths, offer growth potential and leverage its existing assets for future growth and expansion.

JSPL has been recently rated the Second Highest Value Creator in the world by the Boston Consulting Group of USA. Naveen has also featured among the top ten of ‘India Inc’s Most Powerful CEOs 2011’ in a survey conducted by the Indian Market Research Bureau (IMRB) for The Economic Times-Corporate Dossier. He has also featured in the ‘Most Influential People’s List’ for the state of Haryana, by India Today and has been conferred with the ‘Ernst and Young Entrepreneur of the Year Award 2010’ in the field of Energy and Infrastructure.

He has also featured in the prestigious Forbes Asia Magazine in its October 2009 issue in the cover story – “Citizen Tycoon”. JSPL was accorded the Forbes Asia’s ‘Fabulous 50’ international award in 2009 & 2010 for being the best of Asia Pacific’s biggest listed companies.

Naveen Jindal has been ranked the best Indian CEO by Business Today, based on a study ranking the comprehensive performance of CEOs over a period of last 15 years. He has also featured on Fortune Asia’s list of 25 hottest people in Business’ in 2012.

In recognition of Naveen’s exceptional distinction in the fields of entrepreneurship and public service, unqualified reputation for honesty, personal integrity and high standards of personal and professional character, the University of Texas at Dallas has named its School of Management in his name. It has now been christened as the Naveen Jindal School of Management. The recognition has also lead to the establishment of the Naveen Jindal Institute for Indo-American Business Studies.