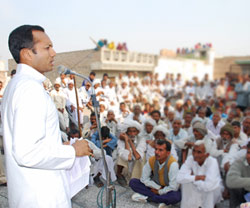 Naveen has been the driving force behind several changes in the policy governing shooting as a sport in India, which has resulted in the easing of restrictions on sportspersons: