Whenever countries made very fast progress, it was during a time when they had the largest youth population. India is going through that now. But we also realise it’s only a window of opportunity. It’s not going to remain like this forever. We have to give good quality education and good quality skill sets to our youth so that they can be gainfully employed and make meaningful contributions to the development of the country. If we keep our youth unemployed and they are not able to effectively contribute to the nation’s development, then obviously it’s unfortunate for them, but it’s even more unfortunate for the country, because the country would have lost this opportunity forever.

Naveen Jindal in an interview to India Knowledge@Wharton at the
Wharton India Economic Forum, 2010 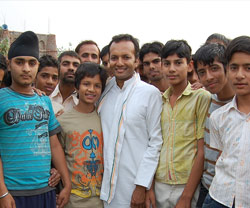 If politics is a means to address the problems of a nation, then the youth are the medium – this has been Naveen Jindal’s policy ever since his entry into public life. It is this conviction that has led to his personal focus on education over the years. His programmes for the national flag, women’s empowerment and health have always at some level drawn on youth power for an impetus. For instance, the objectives charter of his initiative, the Flag Foundation of India, includes the following statement: “… To take the message of our Tiranga to every Indian, we intend to make use of all available and appropriate mediums … with other civil society and advocacy groups, professionals, corporate houses, educationists and other like-minded individuals with a special focus on children and the youth of India.”

In 2005, Naveen took forward his belief in the need to tap into the strength of the youth by setting up the O.P. Jindal Gramin Jan Kalyan Sansthan in memory of his father Om Prakash Jindal. The Sansthan is a non-profit organisation working for the holistic development of his constituency Kurukshetra as also Kaithal, Yamunanagar and Hisar, all in the state of Haryana. Its focus areas so far have been health, youth and women’s empowerment.

The activities of the Sansthan begin at a very basic level. So far, over 1,000 schools in Haryana have been provided with 5 lakh free notebooks for financially disadvantaged children. To promote a wholesome education for these youngsters, the Sansthan organises painting, debate and essay competitions. It also offers scholarships for the under-privileged, runs free personality development centres and English speaking classes, and extends career counselling gratis to those on the verge of adulthood.

Being a sportsperson, it’s natural for Naveen to appreciate the problems faced by aspiring sportspersons in the country. The Naveen Jindal Friends Club in Haryana (under the aegis of the Sansthan) promotes health and fitness among youth while also easing the lives of aspirants. The Club distributes free cricket, volleyball and badminton kits, and organises tournaments from time to time. Drawing on his own experience, Naveen understands the importance of exercise in the lives of not just athletes but also non-athletes who wish to lead an active life. With this in mind, he has set up 315 gymnasiums in Kurukshetra, Radaur & Kaithal, bringing to the local people facilities that would otherwise have been unheard of in such areas.

Naveen also offers sports scholarships to youngsters through the Sansthan. Many recipients have gone on to become national-level gold medalists in weightlifting, kabaddi and other sports.

The Sansthan has been specifically encouraging the youth of Haryana to contribute to development by offering them scholarships to participate in the social leadership programme of the respected ‘Deshpande Centre for Social Entrepreneurship’ in Hubli, Karnataka.

Melding Naveen’s passion for the national flag with his commitment to the youth, Tiranga Utsavs are organised on a regular basis to foster a spirit of nationalism among young people and guide them on what their role in nation building can be. So far over 235 such utsavs have been organised across Haryana with about 54,000 participants.

Team Jindal has tied up with the art-and-culture promotion organisation ‘Be Artsy’ to launch a youth awareness and volunteer hunt in Kurukshetra. The campaign – Volunteer for Volunteerism (V4V) – is about awakening the spirit of volunteerism among the masses, especially younger sections of the populace. V4V involves a number of creative interventions such as street theatre, photography and writing to spread awareness about population and other social issues.

‘Be Artsy’ was started in November 2010 with its lead performing arts initiative, ‘Be On The Street’, in Delhi and the National Capital Region. The movement has grown to involve 25 street theatre troupes and over 600 volunteers from Delhi NCR, Mumbai, Ahmedabad and Goa. Kurukshetra has now joined the campaign at different levels since Naveen believes the programme has great potential to instill a sense of involvement in nation building among the youth of his constituency. Besides, improving social and health awareness in Kurukshetra has always been one of his focus areas. Volunteers of V4V will go to schools and other educational institutions, residents’ welfare associations and community centres to conduct workshops addressing all such issues that are crucial to our society.

For further details on the National Volunteer-for-Volunteerism Campaign, click here